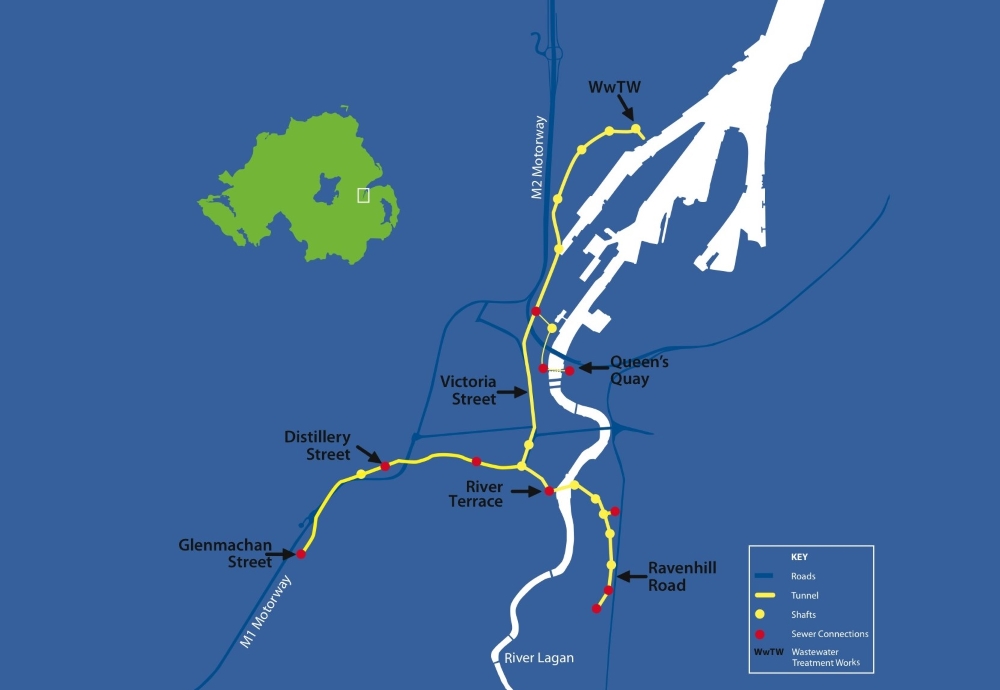 Belfast, in common with many UK cities, has an old, largely Victorian sewer network, incorporating combined sewer and stormwater flows. The system has a limited capacity and regularly overflows, leading to flooding of low lying areas of the city. The Belfast Sewers scheme was proposed in order to significantly reduce the number of these flooding events and improve the water quality in the River Lagan, which flows through Belfast.

Northern Ireland Water (NIW), the Client, appointed Atkins to produce the reference design for the solution, a £100m stormwater management scheme, which was put out to tender for a design and build contract under NEC Option C. A Joint Venture, consisting of Morgan=Est and Farrans was appointed Contractor in August 2006, with Morgan=Est’s design arm UPS appointed as their Designer. Atkins was retained as the Project Manager. Some 9.4km of tunnels were required, picking up 10 Combined Stormwater Outfalls, and producing a total storage capacity of 85,000m3. It is predicted that the scheme will be utilised around 15 times each year, taking a total annual flow of around 826,000m3.

With highly variable geology well beneath the water table, Earth Pressure Balance (EPB) TBMs were employed on all of the drives, with the bulk of the tunnelling carried out by two Lovats: a 4.0mID; and a 2.44mID. Many modifications were made to the cutterheads to cope with the changes from alluvium to sandstone and the occasional extremely hard dolerite dykes, and on a number of occasions significant works were required during tunnelling, at times using compressed air (requiring bulkheads to be placed within the tunnel). The southeastern branch in Ormeau Park was to be driven with less cover and through the Upper Boulder Clay. Pipejacking was adopted, using a 2.1mID Lovat EPB, which struggled through large numbers of wheelbarrow-sized boulders, often found in clusters or ‘nests’. The shaft locations were defined in order to intercept the 10 major stormwater overflows, with an additional 3 shafts for inspection and escape purposes. All shafts were sunk as dry caissons with local dewatering of the lower aquifer. An in-situ concrete lining was placed in the lower section of each shaft. The 38m diameter, 40m deep Tunnel Pumping Station (TPS) was constructed using diaphragm walls to rock level and a sprayed concrete lining (SCL) below, with an in-situ concrete secondary lining to ensure a smooth interior. A central wall divides the shaft into dry and wet wells, the dry well housing pumps and pipes capable of 16m3/s. Tunnelling was completed in September 2009, and the TPS pumps commissioned in October 2009.

LBA worked with Atkins, Northern Island Water’s project managers, provided managerial assistance and support from June 2007 until the end of 2009. We also provided a tunnel inspection service for the full duration of the construction project.