Terry Crabb was a well-known, highly respected, and extremely popular member of the foundation engineering and tunnelling communities, within which he worked for more than 30 years.

Terry was a Director of LBA who made a substantial contribution to the success of our company.

Tragically, Terry died suddenly whilst on holiday in India in 2008. Terry was particularly devoted to ensuring the development of the younger members of his teams and of the industry in general, looking to release an individual’s latent ability, build on best practice and innovation, and build the next generation of leaders. 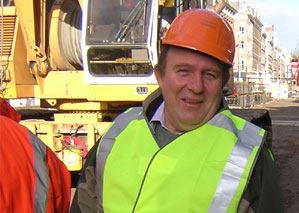 The aims of the Trust

In memory of Terry, a charitable trust has been established, whose objectives are:

The Trust will provide funds to assist with relevant training or research, and to recognise worthwhile endeavour by providing awards and prizes. Funds are available to UK students and young people working in the UK.

In delivering these objectives, the trust will work closely with the British Tunnelling Society (BTS) and in particular with the newly formed Young Members Committee of the BTS.

The Trust is administered by five trustees.

For further information on the Trust, applications for grants and donations, please contact welcome@lba.london